Our pro-active translation memory translates your app automatically to new languages. It works like a magic! Learn more about it

The spirit of sharing 🔗

ShareTM is what makes Localazy unique and different from other translation platforms.

We are developers; we share our code on Github, Gitlab, or in another place. We cooperate, share our knowledge and libraries. We have this in our DNA. It saves us time and money; it helps us to move forward faster and produce better software.

Why don’t we share translations to make our apps better for the worldwide audience? Why we pay for translating the same words again and again? Does it make sense? It does not, and ShareTM is here to fix this issue.

Upload your app to Localazy and instantly share your translations with other apps on the platform, and as a reward, get your app translated to more languages for free.

ShareTM works on two levels, and the first one is assistive translation memory. It helps your translators while they are translating your mobile app. It speeds up the process and provides industry-related context, and as our industry is mobile apps, ShareTM empowers your translators with the insight into the most common translations and how many apps use them.

In this mode, ShareTM is no fun - extremely useful, but still just a passive translation memory

. The real magic is the pro-active translation memory mode.

Both ShareTM and InTM suggesting translations: 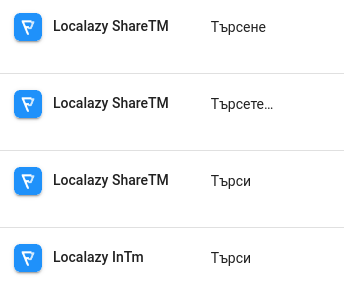 How does the pro-active mode work? 🔗

The basic idea is straightforward. When a translation is approved, it’s sent to ShareTM. And ShareTM distributes it across all other apps on Localazy. It works exactly like this except that it’s not that simple, and there are many gotchas that we need to handle correctly.

Of course, when a new string is added to Localazy - for example, if you import your app - ShareTM learns about it and looks for all possible translations that it can provide to your app.

How does it feel? You import your app, and in several minutes you see that Localazy automatically translated it to up to 80 languages. Depending on strings in your app, it can translate up to 50% - Yeah! Half of your app! - instantly.

What does it mean that your app is translated? Keep reading.

One of the most critical parts of Localazy is our unique review that integrates many features in Localazy, and ShareTM is no different.

Through the review, you can not only approve translations provided by ShareTM, but you can choose from several different versions carefully prepared for you. Also, you can easily update the text as per your need creating an entirely new translation from the existing one.

With the review process, you have perfect control over how your app is translated with the shared translations. And as you can above, the static analysis works with ShareTM too warning about missing placeholder.

When you move your app to Localazy, it may be already translated to a few languages, and you have your own preferences. Usually, mobile app developers prefer simple locales for well-defined languages such as cs for Czech, but there are also apps with full locales like cs_CZ. And what about Chinese and different scripts (Hans and Hant)?

ShareTM understands that and uses mapping tables and algorithms to distribute translated phrases to existing languages. It can work with more languages (for example, both de and de_DE can be in your app) and even with aliases for deprecated locales.

Why do we talk about 80 languages? That’s the number of the essential languages ShareTM is translating actively. Internally, ShareTM supports 3000 locales and aliases and can work with all of them.

Google’s Translate and other machine translation tools provide a general translation. While they can perfectly translate regular texts, they struggle with short sentences or single words.

For example, in the Czech language, we usually use menu or nabídka as a translation for the English word menu (a very common word for mobile apps). However, Google Translate offers jídelní lístek, which is a list of dishes. It sounds weird to us, and it’s an incorrect translation. And it makes your app looks stupid.

ShareTM is, on the other hand, more likely to offer menu as a translation because it’s model is trained for a specific field; for mobile apps. ShareTM works with real life translations created by humans. The more apps on Localazy, the better are suggestions.

Machine translations are essential even for ShareTM - they provide additional context for reviewing translations and lead to improved quality of your mobile app translation. It’s not a battle. Each of these technologies has its place in producing internationalized mobile apps.

At Localazy, we can’t share everything as we are obligated to keep some of the mechanisms as a competitive advantage. We do a favor to those who support us on our mission.

That is a perfectly valid point for some of your strings too! URL addresses, ad and app identifiers, and other things are supposed to be private and to remain private. ShareTM can detect those strings and don’t process them - don’t share them with other apps and don’t even store and index them.

You may or may not already notice that ShareTM is not our only little helper and that there is his close relative called InTM. How these two technologies that never sleep and work hard to make your app better differ is described in What is Localazy InTM article.