Battery Guru is one of the perfect and well-designed solutions for monitoring your battery, getting application usage, finding the top drainer, giving you advice on how to take care of your battery and get the most of it. Check out how its author localized the app to more languages.

What is Battery Guru

Besides all of that, Battery Guru displays battery usage information, measures battery capacity (mAh), show estimates, and helps you change your charging habits with useful tips to prolong battery life and increase its lifespan.

First and a general idea of the app was showing basic battery info to the user, then I found a good potential in this app. Out of nowhere, people started downloading it and dropping suggestions; at one time, my TO-DO list was pretty long, so I decided, now or never. In just one year (now), I managed to have 300k+ downloads and counting without single paid promotion. Now we are here; in 80% of countries, Battery Guru can be found in the top 10 battery apps on PlayStore.

Why should people use Battery Guru? 🔗

People love how I manage things, from listening to their suggestions to regular updates, which sometimes happen a few times a month. Features of the app are based on multiple and extended tests with a wide range of testers. Place suitable for dropping your opinion and where all happens (suggestions, bug reports, testing, cooperation…) is this Telegram Group.

This is our community, where you can get the most answers; if no, you can always tag me and get it fast. You can rarely find this for any other app. Usually, it’s going over some filled forms, emails or even don’t have a way to ask questions, give suggestions or report a bug, and when you do, it can last for a couple of days.

Unlike others, problem-solving is pretty fast, people help each other, and there is also an off-topic. Such a healthy community and everyone is welcome.

Let’s go back to Battery Guru itself, PlayStore is a place full of “such” apps, but if you take a look closer, 90% of them are just well-advertised applications that do nothing other than sucking your battery. I want to stop that and show people how some decent projects look like and what they actually can do with them. Battery Guru offers the most of the things, well-baked features, and its service is power efficient. You can use the app that can be used in many aspects.

There are several quality categories of USB cables you use every day to charge a device; with Battery Guru, you can quickly check how much power passes through it and decide whether it is good or bad. The same thing means for chargers. Measure the charging current (in mA) to find out! The app will show you max current achieved while charging.

There is a very high amount of features, and my advice is to try it, download from Play Store.

How do you advertise your app, from where all good reviews? 🔗

Most people ask me where all of those, how much I spent per month on advertising, do I buy reviews? Simple answer, no, people like how I behave with them, holds the situation and how fast we all become friends. None of the people who talked with me has anything negative to say about it; good things always spread; that’s the fact.

Do you have any other projects worthy of mention? 🔗

Battery Guru is not my first project. Before I started it, I was working on a world-famous optimization app L Speed. This app caused a boom in the rooted world of Android. People massively downloaded it to optimize their older devices.

After just three years on the Play Store app passed three million downloads with a rating of 4.6; soon after (half a year), the app was removed from the store because of a violation of some new and updated policy of what apps can and cannot touch on the devices.

Since L Speed was tweaking and a kernel modifier app, Google’s opinion was risky to be on PlayStore and removed. The project is still updating (but significantly lesser). You can also find a lot of content on YouTube and Google itself. Until then, I made many good connections with people, the same attitude, and the same behaviours. After removal, I lost everything, my job, earnings and was on zero. This was a time for new things; in a short period, I have developed six more apps found on my Developer Profile on PlayStore.

When people heard what happened, many of them shared my stuff, helped me build a community from the beginning, and brought me back where I belong.

Battery Guru holds a good position and rank on PlayStore with ~5k of reviews and 300k+ downloads and counting.

What about multilingual support? 🔗

All of my apps are multilingual. I have been in this job for five years now, and I’m struggling with translations since the beginning.

People keep asking when it will support Spanish, Turkish, Russian and so on, where I can say I was pretty upset because I have to do all alone, from app design, coding, bug report approvals, user support, etc. on. Aside from all of that, I sent plenty of emails to people who want to help translate, asking in review responses on PlayStore, in my community groups. It was so inefficient time-wasting way and led to formatting issues misreadings.

I was seeking a solution, all I found was free trials with high prices for my standard here, generally expensive tools for my needs or they require per month paying for using their services, Okay, I pay one month, upload 2000 phrases and what then, I have to pay again and again for the same amount. I was so unhappy returning to my usual way of doing it (for the 10th time).

Some weeks ago I found something and fell in love with it.

Localazy, the most perfect and efficient way to do translations of the applications. It offers 200 source language strings for free; it uses a one-time paying system and uses referral links and rewards for every new user. Pricing is so cheap for what it offers, and I hope all will remain the same.

One of the things I like pretty much is a well-optimized site for mobile devices; I can check everything from bed before sleeping. 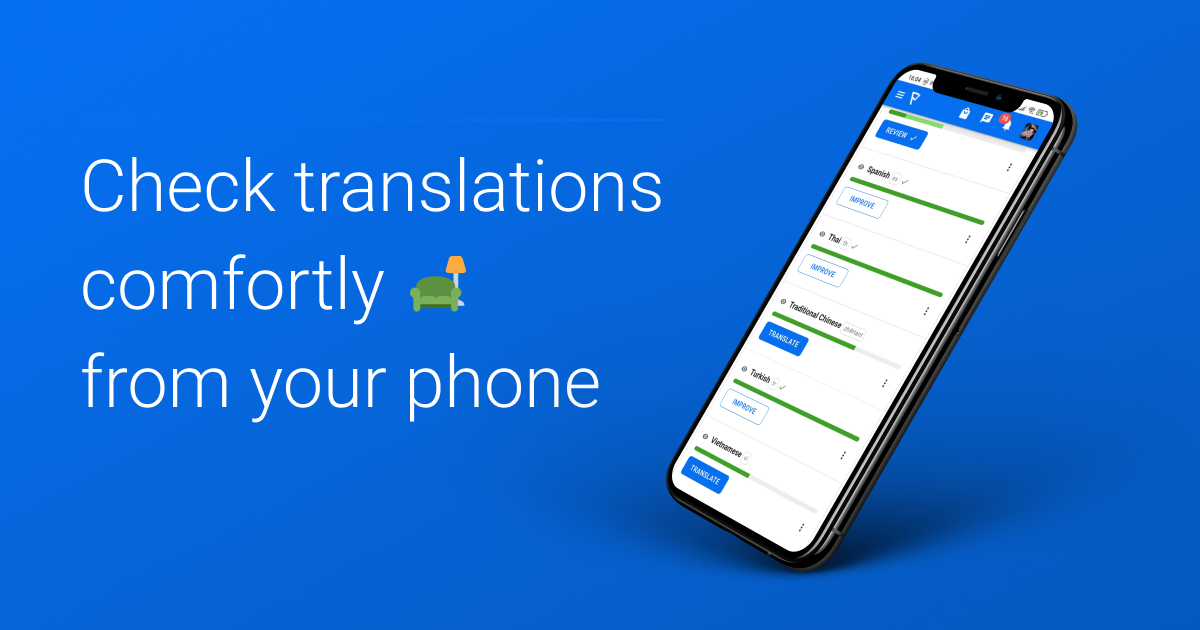 People are satisfied. A lot of them opt to translate on the first day I have announced it. They found it a comfortable, easy and fast way to support me.

Words about Localazy from my translators? 🔗

What I have to say about Localazy? 🔗

From my side, as a developer, I found it as a professional localisation tool that solves all of my issues.

When I added my strings, the first impression was that 1000 free strings could cover 3 of my apps at the moment. Easy setup, I had many questions when I started using it, so Localazy owner and his employers helped me solve it all in about 24h (they were so user friendly).

From things Localazy offers, I am using the Gradle Plugin and CLI in my app implementation to manipulate strings easily. One day I will see with the Localazy team to write about my implementation and how I’m using it.

What else to say? I will continue using it and also try to open eyes to other developers. Good things should spread, don’t waste your time, get Localazy.

🏆 Get featured on the Localazy Blog 🔗

Do you love Localazy? Would you like to share your own success story? Head to the community section and apply for an interview now! We will promote your product on our blog and you'll get rewarded for it! 😉

Get featured on the blog - answer our questionnaire in the community section to get the ball rolling!

How to localize & translate your website in three steps with Localazy?